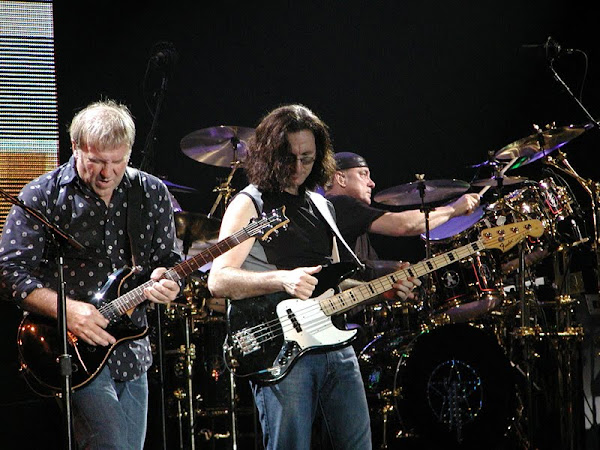 Durrell and I received a contract from Open Court approving the manuscript for "Rush and Philosophy". The tentative date for final manuscript revisions is late October, so our hope is for the book to be on the shelves by late 2010!
Posted by Jim Berti at Wednesday, March 17, 2010 No comments:

A Farewell to a King

Over the weekend, I lost a good friend to pancreatic cancer. Diagnosed in September, Peter was told he was at stage four and that the disease was spreading. Despite his pain and unbearable suffering, Peter kept a positive outlook on life, his will to live was an inspiration to all those in his circle. I have now lost three close family/friends to cancer, the death sentence that does not discriminate. Seeing someone as strong as Peter, slowly wither away was difficult, and I spent many nights angry, cursing the sky above, and questioning the reason for such a good person to die in such a horrible manner. Peter, however, would not allow me to feel sorry for him or for his illness, rather, he and I and our friends celebrated each day he was with us, toasting each day with a pint of his favorite Stongbow Cider. I will miss Peter, but at least I was fortunate to have spent three years as his friend, learning so much from his wisdom. Tonight, I think of the lyrics from Afterimage: "Suddenly, you were gone
From all the lives you left your mark upon
I remember how we talked and drank into the misty dawn
I hear the voices"

Lakeside Park, though we did not spend any nights by the pier, there were plenty of drinking at Mahar's and smoking on the porch, listening to the rebel music.

Good night, wherever you are.
Posted by Jim Berti at Monday, March 15, 2010 No comments:

The following is a quest post from Phil Simon, his web site is located in the Finding Your Way listings.


My favorite band is Rush. Always has been. As a kid, it was the music that attracted me, but as I grew older and presumably wiser, I was able to move beyond. I could understand lyricist Neil Peart’s visceral and profound lyrics.

They began to speak volumes to me.

Nicknamed “The Professor”, Neil has written books, penning four incredible texts about traveling, loss, and music. As I began writing books and blogging myself, I developed an entirely new appreciation for Peart’s genius that affects my writing to this very day.

In this post, I share some of Neil’s writing tips that can help scribes of all levels.

1) Get it down before it gets away.

This is perhaps my most important rule of thumb, whether writing books, blog posts, or emails. Too often in my early “career”, I found myself striving for perfection from the minute that I typed a word on a screen or page. (Yes, I am old enough to have actually used a typewriter back in the day.)

2) Forget writing well. Just write, before it gets away.

Centuries ago, Voltaire expressed the same sentiment: “The better is the enemy of the good.” While different people have different writing styles, I find it best to build now and polish later. Often I force myself to finish a page, paragraph, or even a thought when I am sure that I can do better. Much better.

Why do I force myself to accept mediocrity temporarily? Because the value of seeing it on the screen exceeds the value of having it in my head – where it could easily be lost and never again be found.

After the release of his fourth book Roadshow: Landscape With Drums, I listened to an interview with Neil by original MTV VJ Mark Goodman. (Yes, I’m dating myself again.)

Neil was speaking about his writing style and quoted Pablo Picasso:

“Inspiration exists, but it has to find us working.”

This is a very powerful sentiment and one worth remembering. Expecting the material to just magically flow once we sit down to write is typically an exercise in futility. I can think of many moments while writing my first book when I had a great idea while I was at the gym—i.e., nowhere near a computer.

Rather than continue my running and hope to remember it later, I would do the following:

• Stop
• Take pen to paper
• Jot down the note
• Diligently go to work upon returning home.

Jerry Seinfeld does the same thing when writing his standup material. Some may remember an episode of the eponymous show in which he thinks of a hysterical joke in the middle of the night and then writes it down. Upon waking up, he can’t remember what he wrote and promptly enlists George, Elaine, and Kramer to decipher his text.

Hopefully, you write notes neater than Jerry does. Whether it’s a notebook, BlackBerry, or some other mechanism, make sure to capture your thoughts as soon as they happen. Remember that you don’t know when they will hit you, so be prepared.

4) Don’t be afraid of the fifty-cent word.

Listen to Rush songs and you’ll find words or phrases not frequently used in everyday conversation. Hey, it’s a cerebral band. Some of my favorite Rush songs include words such as “stratospheric”, “parallax”, and “subdivided”.

Is this showing off or using big words just for the sake of doing so? Hardly. An avid reader, Neil writes each word with a distinct purpose.

Trust me. You don’t write a song about the dawn of the nuclear age without brevity, clarity, and a sense of mission.

I’ve read different opinions on the matter that run the gamut, especially with respect to blogging. On one hand, some believe that you should never talk down to your audience. Of course, if you only write with a grade school vocabulary, then what does that say about your audience? On the other hand, why rely exclusively on polysyllabic words when simplicity will suffice?

I try to strike a middle ground when I write. Clearly, using words like “desiderate” rather than “want” seems to be a bit excessive and unnecessary. But I’m a big believer in nailing a sentence with a true gem of a word, much like Dennis Miller does (or George Carlin did) during their standup routines.

I’ll be the first to admit that what works for one doesn’t work for all. If you don’t heed the advice in this post, I’ll get over it. Really. I work as a consultant, so I’m used to being ignored, blamed, crucified, and worse.

But if you do listen, if you do take a few minutes out of your day and think about what Picasso, Neil Peart, Jerry Seinfeld, George Carlin, and Dennis Miller have said and done, your writing should improve. And isn’t that part of why you read this in the first place?

Am I off base? What do you think?

When he’s not listening to Rush absorbing intelligence or networking like an S.O.B and blinding people with his great writing, Phil Simon goes around sticking technology right where it belongs – in the workplace.
Posted by Jim Berti at Sunday, March 07, 2010 No comments:

Soundtrack For the Week

Here is a thought, if you had to create a soundtrack of Rush songs exemplifying your week, what would they be? Share a summary of your week, and the Rush songs playing out your soundtrack.

It was one of "those" weeks, sense perpetual gloom and misfortune. Feeling like I was trapped by a dark cloud, encompassing on my every movement. No need for extensive detail, other than, by Friday night, my psyche was frayed, I felt as if I had been through a dizzying array of emotions, an exhausting fluctuation of ecstasy and self-awareness, to sadness and isolation. As my brother told me, "when it rains, it pours", and that best sums up my week. We all have problems of our own, so what good does complaining do? Here is my Rush soundtrack for the week:

"Workin Them Angels"
"Prime Mover"
"How It Is" (New found love for this song)
"Face Up"
"Ceiling Unlimited"
"Freewill"
Posted by Jim Berti at Saturday, March 06, 2010 1 comment:

Why Rush and Philosophy?

Less than a year ago, I bought my first "philosophy" book in years, "The Grateful Dead and Philosophy", edited by Steven Gimbel. While being a fan of the music of The Dead, my experience with philosophy had not gone beyond the graduate educational philosophy courses. "The Grateful Dead and Philosophy" sparked an interest in philosophy, soon I was devouring the works of Sartre, and Nietzsche, Rand, and others. I began to realize that musicians and philosophers share the capability of awakening a deeper awareness for thinking. In the back of "The Grateful Dead and Philosophy" book, I wrote myself a note, "why not Rush and Philosophy?, after all, the band has been called the "thinking man's band". Within two weeks I made contact with Chris Matthew Sciabarra whose e-mails and correspondence gave me the confidence to pursue this project. The next Rush-ian scholar I contacted was co-editor Durrell Bowman, whose Doctorate dissertation was developed around Rush! The connection of Rush fans, inside and outside academia continued to grow, and before long, dozens of abstracts and papers, from professors with doctoral and published research, to teachers whose contributions to this project will be their first major work of publication. The "Web of Rush-Ians" as I have come to call the network, has proven to be an interesting and eclectic group, each bringing various perspectives and stories about their Rush experiences. In the up coming days, I will be posting some tid bits of information about the contributors and their research, offering a sampling of what is to come.

What is it that you enjoy about Rush? Are there any particular themes or topics that have been "tweaked" by your interest in Rush? Do you find yourself brining Rush into your profession, intentially or unintentionally? Share your stories.
Posted by Jim Berti at Tuesday, March 02, 2010 No comments: